Full circle: Dwight Marshall’s rise from Leyton to the football league and back

29 Sep Full circle: Dwight Marshall’s rise from Leyton to the football league and back

Posted at 12:11h in Football by andrzej.perkins

There won’t be many who remember Dwight Marshall playing for Leyton in 1987 and Leyton Pennant in 2002, but two spells with our club sandwiched what was an unlikley but successful Football League career.

Dwight arrived in the UK from Jamaica with his mother and brother as an eight-year-old, but he never thought of playing the game he loved for a living.

“I never had the ambition of becoming a footballer when I left school,” Dwight says. “I began playing non-league for Hampton Town, before I went to Leyton Wingate, Grays Atheltic and developed my skills.

It was at Leyton Wingate where Dwight really began to make an impact in the senior game, spending almost two seasons in E10. Initially playing as a winger, a move to Grays Athletic and into the centre-forward position would change Marshall’s life fover.

“I was working in administration at the time and saw that as my career, but I had one good season at Grays and luckily I was invited down to Plymouth for a three-day trial. A day after that trial I was signing a professional contract and the rest is history.”

Marshall made an instant impact in Devon. Argyle were in Division 2 (now the Championship) at the beginning of the 1991/92 – the season before the Premier League was introduced – and a goal on his home debut in a 2-1 victory over Barnsley made Marshall an immediate hit with the Green Army.

“I grabbed the opportunity at Plymouth with both hands, although it was a pretty new and alien experience for me,” continues Dwight. “Travelling down to Plymouth from London, where I was living, I thought to myself ‘what am I letting myself in for? Where the hell am I going?!’

“But I needn’t had worried, it wasn’t as though I was a teenager living away from home at a young age. When you’re 25 or 26 and you’re working Monday to Friday 9-5 you think your days of making a living from playing professional football are over, but this was an unbelievable chance that I couldn’t turn down.”

Whilst his first campaign at Home Park ended in Argyle’s relegation, Marshall’s own record was holding up.

“My first season was brilliant,” he admits. “I scored on my home debut and it really was a dream start. Playing in front of a big crowds, the noise, the pace of the game, it was all a bit surreal.

“It was a new experience for me, but conversely, while it was a good season for me personally, it wasn’t for Plymouth and we were relegated.”

However, after making such an impact with Argyle, his second season in the South West, wasn’t as successful.

“It was a complete contrast to the first,” admits the striker. “I picked up an injury and was out of the team but bizarrely I was loaned to Middlesbrough – then in the Premier League and managed by Lennie Lawrence. I only played three times, all as substitute, and remember my debut at Chelsea. I couldn’t believe I was playing in the top flight. It was a dream come true, even if it was short-lived.”

The following season, of 1993/94, though, was better for the fledging forward. Argyle, now in the common day equivalent of League 1, reached the Play-Offs with Marshall back in form in front of goal.

But after the Greens lost to Burnley in the semi-finals, the striker was told of the Hatters’ and David Pleat’s interest.

After a meeting a South Mimms service station in the summer of 1994 with the Town manager, Marshall – who had netted 36 goals in 124 games for Plymouth – agreed to a move to Kenilworth Road: a switch which had its benefits on and off the field.

“I had always wanted to move back to the London area as my family remained there and didn’t move with me down to Devon,” explains Dwight. “I was having to commute back to see them a lot so a move to a club nearer to them was ideal.

“Luton were a very appealing club. David Pleat was a well-respected manager, a purist who wanted to play football the right way. That was Luton’s reputation and at the time they were in what is now the Championship.”

In his first season at Kenilworth Road, Marshall missed just one League game, starting 36 and appearing as a substitute nine times – and ended the Hatters’ leading goalscorer with 13 goals in all competitions as the Town finished the 1994/95 campaign in 16th place.

“I didn’t enjoy the instant success I had at Plymouth,” says Dwight. “It took me a while to get going. I remember scoring my first goal in a League Cup tie at Fulham but I missed a penalty in the shootout!

“Regardless of the penalty miss, the goal gave me the confidence and I soon scored my first League goal for Luton – the winner in a 1-0 win at Port Vale.”

At the beginning of the 1995/96 season, the Jamaican was now a regular in Town colours, but a difficult season for the club ended in disaster for Dwight when he broke his ankle in a defeat at Sunderland in February – at a crucial stage in the season that had seen Hatters lift themselves out of the relegation zone.

“I remember running down the right-hand channel and trying to turn but my ankle gave way,” Dwight recalls, the tone of his voice wavering ever-so slightly.

“That the worst thing about it was the fact it was so innocuous. As any footballer will tell you who suffers a serious injury it was a horrible experience.

“At the time, though, I didn’t know the extent of the injury until I saw the look in physiotherapist Clive Goodyear’s eyes when he ran onto the pitch to treat me.

“At the time we were gaining momentum in our league performances and I was scoring goals. It was a huge shame but there was nothing I could do. It was just one of those things and unfortunately we ended the season relegated.”

With the Town now in Division 2 (League 1 in today’s money) in 1996/97, hopes were high of an instant return to the second tier whilst Marshall continued to make progress in his rehabilitation process.

Almost nine months to the day he fractured his ankle at Roker Park, Dwight started the home fixture with Bristol Rovers and 29 minutes into his comeback the moment he and all the Town supporters arrived when he swept Tony Thorpe’s pass home to give the Hatters the lead in a 2-1 win.

“It was a great feeling to be back, the comeback was incredible and the reception the fans gave me was unbelievable,” recalls the striker.

“That game against Bristol Rovers was one of the best memories I had a Luton. I have a picture on the wall at home of the celebration – although you can only see a very small part of my leg…I’m buried beneath all my team-mates who had bundled on top of me! 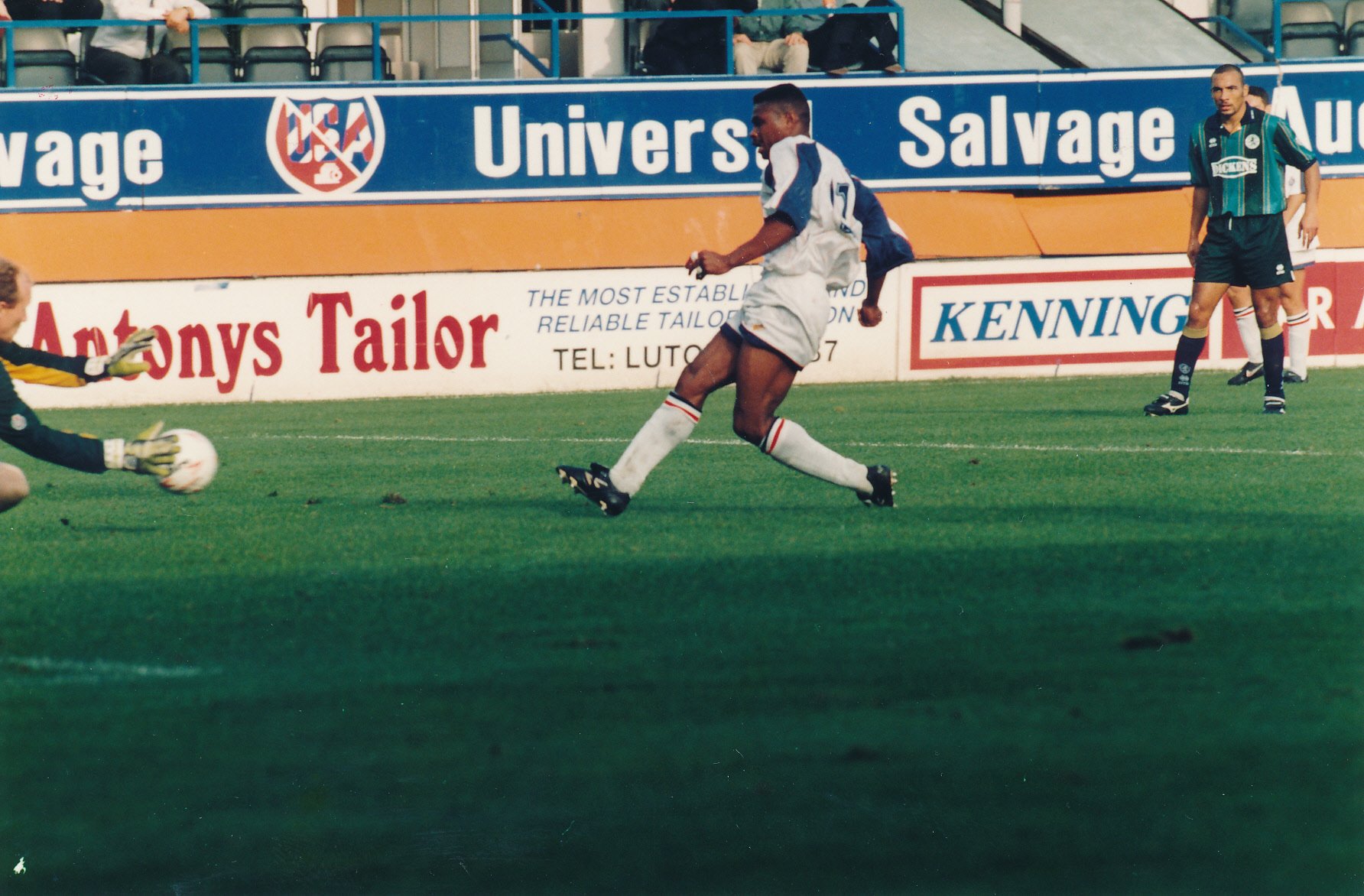 “A lot of people helped me during that time, Clive, my team-mates, the fans and my family, but I definitely felt I had lost my pace as a result of the injury. That was a big part of my game, it was built around my speed and I never felt quite the same after the injury.

“It was difficult to take on board but I was just thankful that I was able to make a comeback and continue my professional career because some other players aren’t so lucky.”

With Tony Thorpe firing 30 goals as the Town missed out in the Play-Offs to Crewe, Marshall was in and out of the side.

The following campaign, of 1997/98, the Hatters suffered a Play-Off hangover and flirted with relegation until Pleat signed loan star Rory Allen to fire the Town to safety. Marshall still had a role to play – scoring twice in the final eight games in crucial games at Walsall and Brentford.

Dwight began his fifth season at Kenilworth Road in 1998/99 at the age of 32 and all of a sudden he was surrounded by academy graduates Liam George, Sean Evers, Matthew Spring and Stuart Douglas in the Town squad.

And with first team opportunities limited, but with his love for the game just as strong, Marshall was thrown a lifeline by the club that first took the punt on him in 1991: Argyle.

“At that point I felt I needed to play regular football again and Plymouth manager Kevin Hodges took me on,” Dwight explains. 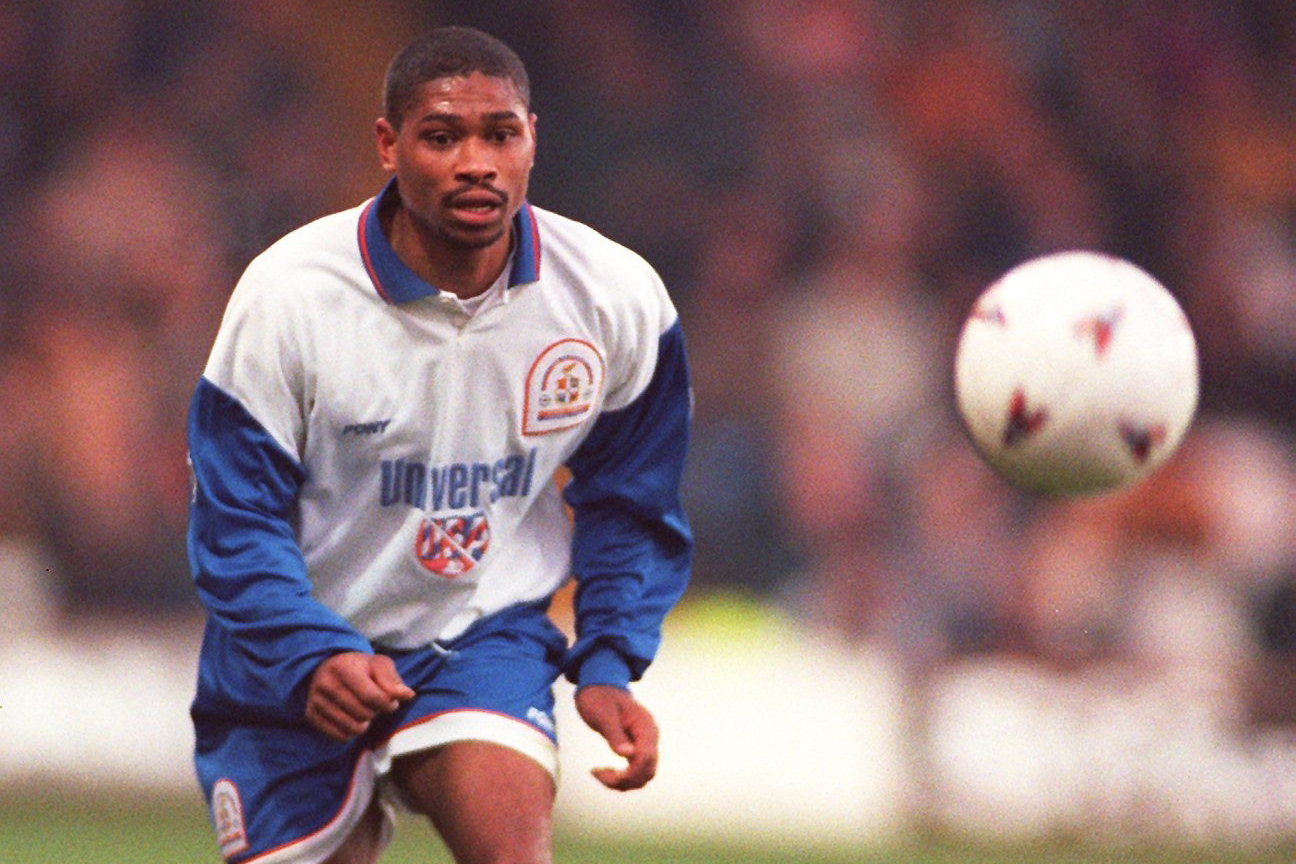 “The chairman at Plymouth knew me from my first spell and told Kevin that they weren’t getting back the ‘Dwight of old’ after the injury, but, thankfully, Kevin persuaded him.

“I had a good season in 98/99, it nice to go back and to do well, I finished top goalscorer but at the end of the season I felt it was the right time for me and my family to quit professionally.”

And that’s where Dwight thought his story would end. Until…

“I signed for Kingstonian after leaving Plymouth. They were a London club with ambition to get into the Football League and I couldn’t believe it when we pulled Luton out of the hat in the FA Cup.

“It was strange going back, especially using the away dressing room and not the home one. It reminded me of the good times I had at Luton and the reception I received from the fans was superb – it is something I’ll never forget.”

Marshall’s career didn’t end there though. After spells with Slough Town, Aylesbury United and Boreham Wood, he returned to the club he’d played for 16 years earlier, now named Leyton Pennant.

On his second debut in 2002, he showed that he certainly hadn’t lost what made him such a success in the Football League, scoring twice against Tilbury, and following that up with a goal in the next game against Hertford Town.

Unfortunately for Pennant, Marshall’s goals weren’t enough to stop them from falling to 3-2 defeats in both games. By the turn of year, Pennant were deep in a relegation scrap, though Marshall’s experience, combined with the introduction of Hakan Hayrettin as manager, was just enough to keep Pennant in Division 1 North of the Isthmian.

Although now back in the 9-5 job, his sojourn into the world of professional football is something that will stay with Dwight for the rest of his life.

“I was lucky to have played for two fantastic football clubs,” says Dwight.

“Luton and Plymouth were good to me, so, so good to me, it’s hard to put into words. I appreciate what they both did for me and my family. It honestly meant, and still does mean, the world.

“They gave me the opportunity to do the best two things in football: score goals and get asked for your autograph. I loved every minute.”

Interview notes with thanks to lutontown.co.uk