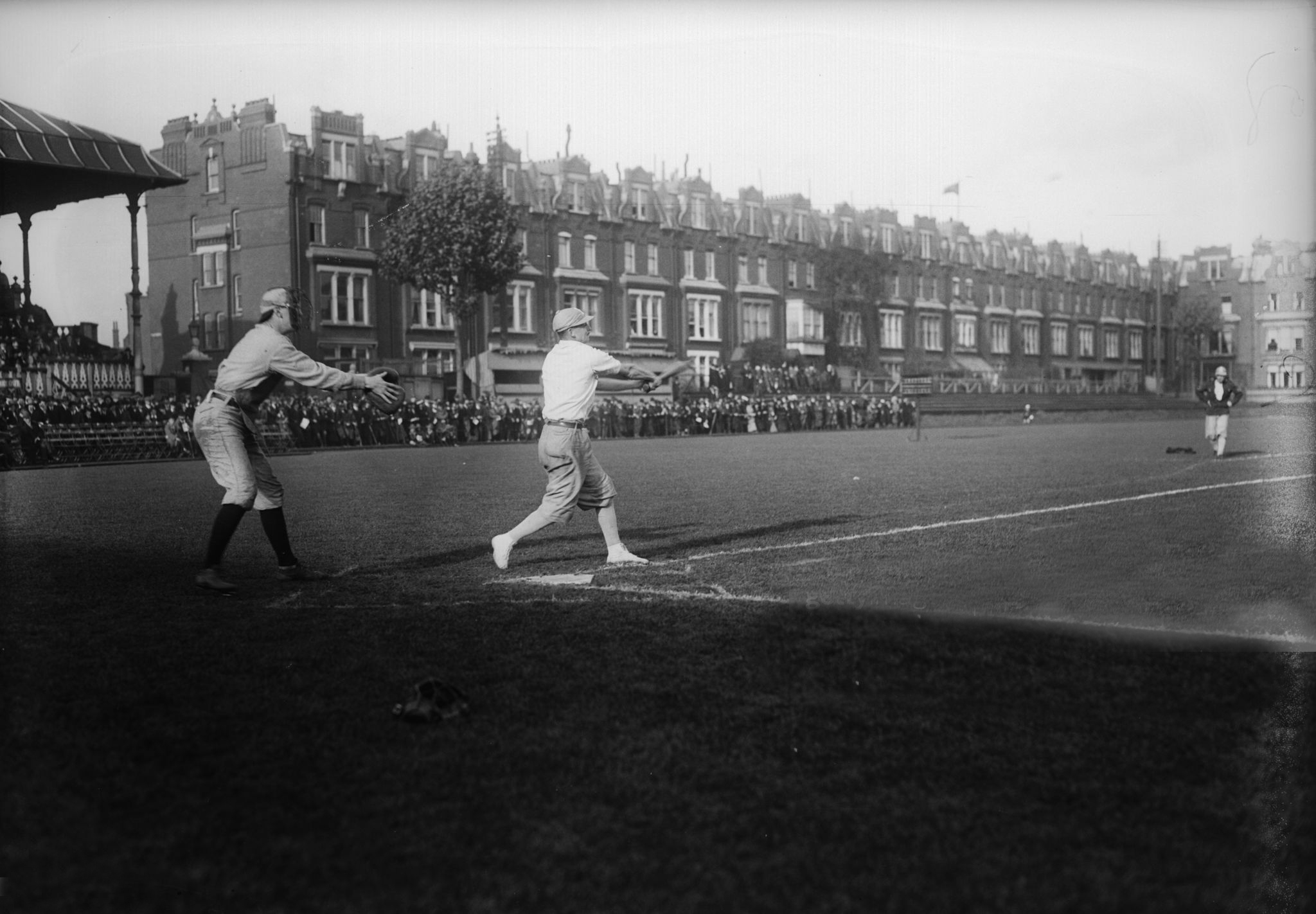 Posted at 10:48h in Football by andrzej.perkins

Today, Walthamstow Football Club is solely that; a football club. However, over the years, the club has turned its hand at a number of sports and games; chess, darts, cycling, billiards, cricket and baseball, to name but a few.

This wasn’t uncommon in England in the 1900s, and is not uncommon on the continent today; Paris Saint-Germain and Barcelona have handball teams, while Porto run a pro cycling team.

But today we’re going to look at how Leyton were one of the forerunners of attempts to launch America’s pastime to the UK.

Last year, Major League Baseball played its first games this side of the pond, with two regular season games taking place at the Olympic Stadium. However, this wasn’t baseball’s first game on British soil.

A form of Baseball had been played in England as early as the 18th century, but it wasn’t until the late 19th century that the more well-known American version of the game arrived on these shores. The National Baseball League of Great Britain and Ireland was founded in 1890 by Francis Ley, a Derby man who had experienced baseball on a trip to America, and Albert Goodwill Spalding, a former baseball player and businessman.

A year earlier, in March 1889, a group of American players toured Britain and Ireland; playing at The Oval, Lord’s Crystal Palace and the Essex County Cricket ground in Leyton, as well as Liverpool, Manchester, Belfast and Dublin before sailing home from Queenstown. The game in Leyton started in bright sunshine for the 7,000 in attendance but by the end it was dull, cold and the spectators soon lost interest. One Sporting Life reader wrote in to express his disappointment that the “batter” missed 18 out of 20 times.

That didn’t stop the pioneers of the game though, and according to Sporting Life, the first game of baseball between two club teams took place between the Richmond and Leyton cricket clubs. George Freeman was Leyton FC’s representative in the side who won 26-21 in a game cut two innings short because of a late start and the cold “stopping the ardour” of the crowd.

The first british national competition, launched in 1890 only featured three teams: Aston Villa, Preston and Stoke. They played between 24 and 27 games each, with Villa winning the competition by one game.

National competition was played on and off in the late 1890s and early 1900s, but the game was concentrated around more local exhibitions.

The British Baseball Association was established on the 9th of April 1906, predominately by football clubs who were looking for a way to make some extra money during the close season. Delegates from Millwall, Crystal Palace, Tottenham Hotspur, Clapton Orient, Woolwich Arsenal, Fulham, West Ham and Chelsea were present, but Millwall, Chelsea and West Ham gave up before a ball was pitched in anger.

Coverage in the national press was almost non-existent, and fleeting at best in the local rags, matching the lukewarm response to the 1890s efforts. According to the Mills Commission, baseball was promoted as “a kind of glorified rounders” and some spectators were just a bit confused about what was going on out in the diamond.

The Essex County Cricket club, of whom a number of Leyton players (the Freeman brothers, Ted Russell) were also members dabbled in the game, but by 1907 Leyton FC had their own dedicated team in the baseball competition.

In 1908 Leyton came close still to winning the title, reaching the final after beating defending champions Clapton Orient 4-3 in the semi.

The Eastern Mercury, a Leyton-based paper wrote “In seasons to come the [baseball] cup winners of 1908 will be respected as much as we nowadays respect the old winners of English [football] cup, vis: the Wanderers, Royal Engineers, Old Etonians and other ancient organizations… Turn up in your thousands and make a din and we [Leyton] will win.”

Despite this enthusiasm, no mention was made of baseball at all in the same publication the following week! Tottenham defeated Leyton 6-5 in the final but it is rather surprising, despite the defeat of ‘their’ team, that no acknowledgement that the final even took place appears within the newspaper. The next mention was not until September when a small reference was made to baseball within a report about the AGM of Leyton Football Club.

Perhaps if Leyton had won then it would be us with a 60,000 seat stadium in the Champions League and Spurs would be in the Essex Senior League!

The popularity of the game was still on the wane, with cricket proving far more favoured. Baseball’s cause wasn’t helped by American players who often chose to leave the country before the end of the season, “providing those enemies of the support with an opportunity to further degrade baseball”.

The Eastern Mercury then wrote “The British Baseball Association would do well to follow the example of the Associations in the colonies – Australia and Cape Colony – where local and native talent is encouraged in preference to an abundance of Yankee talent…. Yankees are not welcomed [at Leyton baseball club] and they have frequently proved to account for a club’s downfall by their departure for the States at the end of July. Many of the defunct clubs have pursued the policy of securing Americans to their own detriment.”

By now Leyton were offering free baseball tickets to those who attended football matches, and the club noted that the baseball operation was running at loss, mainly because there were only four teams left playing; Clapton Orient, The Nondescripts, Woolwich Arsenal and Leyton.

Most football clubs have some strenuous historical claims in their history (ours included), but few can claim to have been champions of British baseball for 23 years.

1911 saw one final push to get baseball going in the UK. Tufnell Park and Crystal Palace joined the league, and the season was opened in May with a England v America game.

The final game took place on the 19th of August 1911 where Leyton defeated Crystal Palace 6-5, owing to their superiority in the field. Some reports suggest Leyton were the holders of the competition, but others say Brentford were the 1910 winners. Sadly the truth may be lost to the annals of time.

The competition finally ran out of steam at the end of the 1911 season, and despite attempts to start again – most notably in 1914 when a group of American ex-pats raised £3,000 to start a league – it wouldn’t be until 1934 that an organised national baseball would return.

The longest lasting legacy of the league was perhaps Derby County’s Baseball Ground, which went on to host football for over 100 years until 1997.