W F Fletcher created the modern football fixture system, but his efforts have been largely forgotten

Posted at 08:59h in Football by andrzej.perkins

There’s a non-league legend that one-time Southern League Secretary and Chairman Dennis Strudwick used to work out the season’s fixtures on the back of a fag packet. He was apparently quite proud of this, though it’s not so funny when you’re travelling to Sittingbourne on a Tuesday evening, as we did in the 2004-5 Southern League season.

You’d think working out fixtures would be rather straightforward – Sky Sports News spends a week guessing who might play each other in what order, and everyone ends up playing each other twice anyway.

Charles Sutcliffe lays claim to being one of the founding fathers of modern football, establishing the Football League’s ‘retain-and-transfer’ system, as well being Football League President from 1936. His story is often told, as the person who created modern football fixture lists, but there was one man who’s played a far more important role, but is often given little to no credit.

When the Football League was born in 1888, there existed no mathematical method of determining fixtures. The twelve clubs held a ballot to determine who would play at home on the first Saturday but after that, the clubs were left to their own devices to organise fixtures.

Not surprisingly, the system often led to fierce arguments, especially when two clubs from the same city or region wanted to play at the same time. But then out of the blue, a Mr W F Fletcher of Birmingham (pictured) rolled up to a Football League management meeting in 1898 to demonstrate his system for fixture making. It was an almost immediate success, and his first sample list was adopted with just a few amendments. 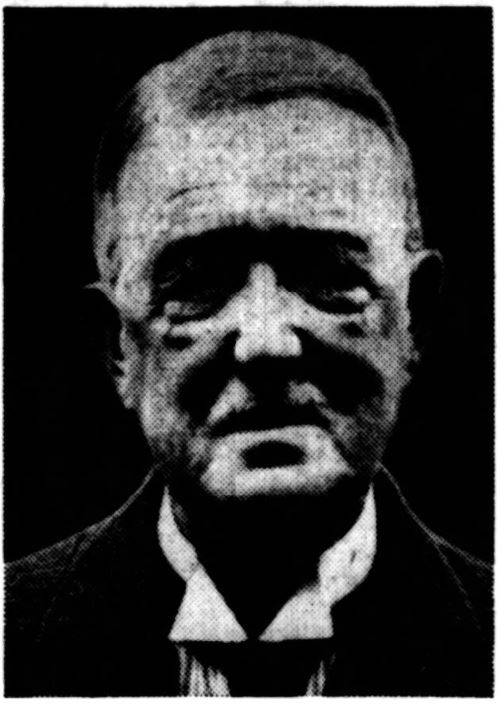 Fletcher had trialed his methods for the Birmingham Cricket League, and he was a Stalwart of the Smethwick Cricket Club.

In the Athletic News, Fletcher wrote: “The lists are so planned that the home matches occur at regular intervals throughout season, being nearly alternate, home and away, as it is possible get them, thus assuring a regular income to all clubs.

“A most useful feature of the system is that it provides for the matches of neighbouring clubs never to clash (a most vital point for towns where there are two clubs, as in Liverpool, Sheffield, and other towns in the Football League).

“Every club has the same chance, and all get an equally good list, arranged in the best possible manner. There is no chance of a powerful club dictating to a more lowly one, endless correspondence is saved, there is no scramble, no sharp practice, no clubs coming to meetings with fixtures partly made up and so stealing a march on the others. There is a firm, equitable, basis for all, and it works out better for all concerned”

Even at the time of its use, no one knew much of Fletcher, or his system. A November 1905 issue of the Birmingham mail read: “If the secretary of a leading football club be asked how the season’s League fixtures are arranged he will merely reply “by means of the Fletcher system”. This answer conveys little or nothing by the mind of the enquirer, but should he in the natural course of things express a desire for more explicit information as to what constitutes “the Fletcher system” he will in all probability receive another equally unilluminating reply, something to this effect – “Oh it’s the Fletcher system, that’s all. It works very well, saves time, is very satisfactory, and that’s about all I can tell you.”

Fletcher spent months of the summer of 1897 devising his closely-guarded method, but by the time that was sorted, he could generate a whole season’s fixtures in just a quarter of an hour.

By 1913 Fletcher had refined his system so that two nearby teams were home and away on the same dates in order not to affect the gates at the other, and matches between clubs were usually four months apart – one meeting in each half of the season.

The ‘Fletcher System’ was used until 1914/15, after which Burnley Director and Football League committeeman Charles Sutcliffe took on, voluntarily, the task of organising both fixtures and referees for the Football League’s matches. His method was used between 1915 and 1968, when computers took over. Fletcher was apparently rather miffed about this, having previously been paid £25 a season until the outbreak of war. He accused the League of using his system without paying for it, and in 1924 he confronted the committee with a claim for £120 for the copyright.

The committee ‘showed their working’ and it was clear that the two systems were very different, though they did still compensate Fletcher, and his original charts are apparently still in the League’s possession – a replica is pictured below. 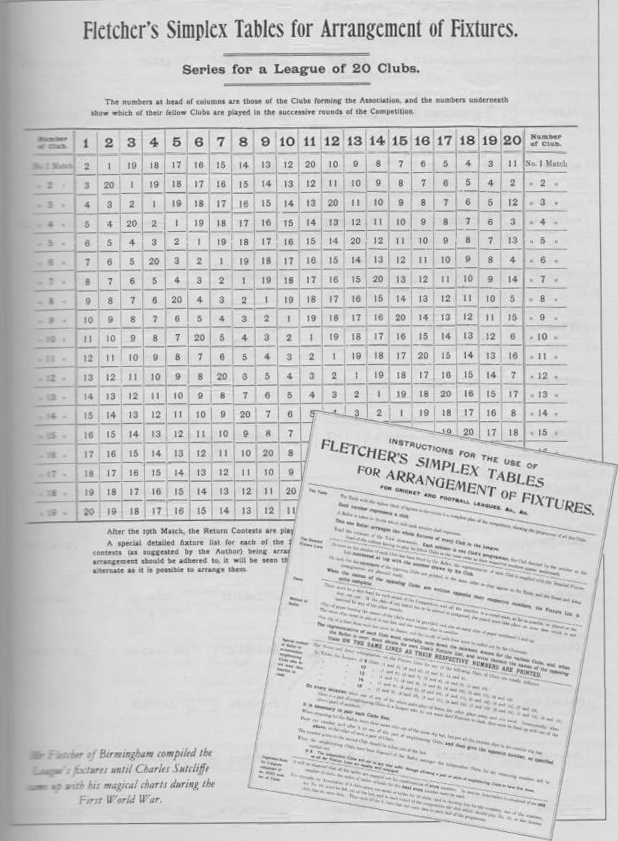 Free from opposition, Sutcliffe locked himself away every summer, working for two or three days and nights to come up with the final fixture list – quite some time longer than Fletchers quarter of an hour. His system was not entirely to the clubs’ liking though, as often clubs would meet each other home and away on consecutive weekends. Fletcher almost snuck back in, but Sutcliffe, operating from a seat of power, made a few changes, and the work was carried on by his son Harold until 1967.

Fletcher continued to generate fixtures for cricket, but his involvement in football stopped and he died in Birmingham in January 1946 aged 80. Clearly a very bright man, he also patented a gas pressure regulating device – this despite working as a commercial clerk, and latter the director of a tin works.

From a position of power, Sutcliffe and his son held a monopoly for the creation of fixtures, but this was not without its hiccups either. Sutcliffe was a fierce opponent of gambling in football, particularly the Football Pools. In February 1936, the League announced that the existing fixture schedule was to be abandoned. Fixtures would be announced 48 hours in advance, in an attempt to make it more difficult for pools companies to produce coupons. Though Sutcliffe was determined to see the pools companies defeated, the chaos caused by the uncertainty over fixtures meant the scheme lasted just two weeks.

Sutcliffe strongly believed that British football was superior to that played elsewhere, and took an isolationist stance on related issues.

When the Home Nations withdrew from FIFA in 1928, Sutcliffe was among those who voted for withdrawal. In response to overseas tours by the Home Nations, he declared “I don’t care a brass farthing about the improvement of the game in France, Belgium, Austria or Germany” and accused FIFA’s one member one vote system of “magnifying the midgets”. Six years later he branded the 1934 World Cup “a joke”.

His antipathy extended to English clubs who attempted to sign foreign players. When Arsenal attempted to sign Rudy Hiden from Wiener AC in 1930, Sutcliffe wrote “The idea of bringing foreigners to play in league football is repulsive to the clubs, offensive to British players and a terrible confession of weakness in the management of a club”.

It’s good to know we had such progressive minds in charge of our game, even then…

With thanks to:
John Treleven – Non-League Matters Forum
League Football, and the men who made it – Simon Inglis