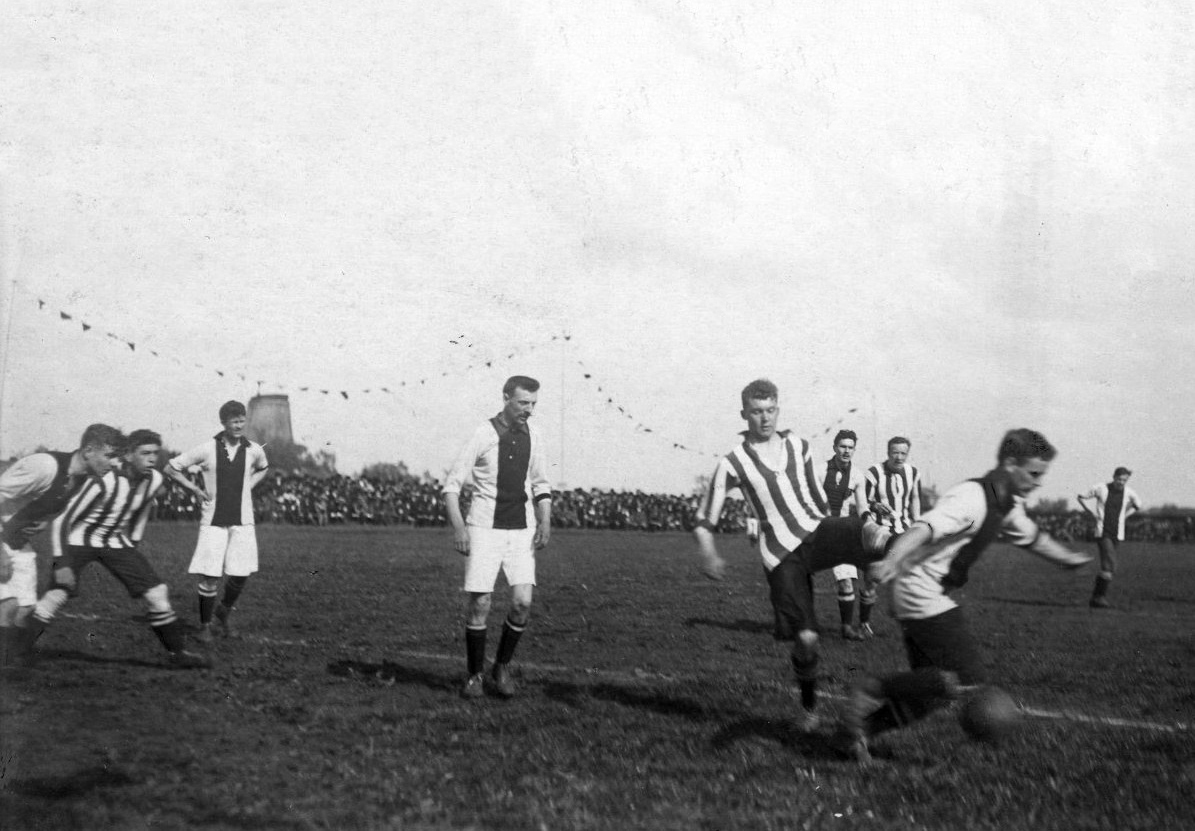 Posted at 08:59h in Football by andrzej.perkins

In the early 1900s, the stature of our club was far greater than current supporters could ever imagine. Then known as Leyton FC, and playing in the Professional Southern Football League in front of crowds of over 20,000, the team was filled with former and current and future internationals.

Among their number in the 1909-10 season was Jack Kirwan, an outside left who would go on to change world football forever. We may never have seen the likes of Bergkamp, Cruyff, van Basten, Total Football or one of the most famous kits in the game, were it not for Kirwan; the diminutive winger who would set sail from East London to Amsterdam, to take Ajax to the first division for the first time.

British coaches were very fashionable in 1910, according to Ajax’s Heritage Manager Carel Berenschot, who told the Irish Mail on Sunday that “The first trainer had to be a British trainer, since soccer was thought to be invented in Great Britain”.

Kirwan wrote to the club in 1953, saying, “I will always remember the kindness and treatment I received from the club and supporters. I wish them every success in the future. I will remember the night we returned to Amsterdam, the night we became first-class [promoted to the top division]. What a great reception the team had. Well, I have had all the football honours a footballer could have. From English cap and many more. But never had a better reception than that night.”

There was only one issue with that statement, though, and Ajax’s belief that they had hired a British coach… Kirwan was, in fact, Irish, and impressively so.

Kirwan was born in Dunlavin, County Wicklow in 1878, and long before he played association football, he was a member of the Young Ireland Gaelic football side of the 1890s and was involved in two All-Ireland finals for Dublin, winning the 1894 title (though only on a technicality, as Cork fans invaded the pitch and attacked a number of rival players minutes before the end).

He crossed the Irish Sea in the summer of 1898 and set about turning his hand to the British version of football. After playing a couple of games for Southport Central, he quickly attracted the attention of both Everton and Blackburn Rovers, eventually settling for the Merseyside club for a fee of £250.

It was at Tottenham Hotspur where he really made his name, though, playing over 300 games and helping Spurs to win the FA Cup in 1901. According to The Complete Who’s Who of Tottenham Hotspur FC, Kirwan was “An out-and-out winger, he did not appear to have the physique to overcome the often robust challenges of the defenders of the day, but in fact, had such an abundance of skill that defenders were rarely able to get close enough to tackle him”. 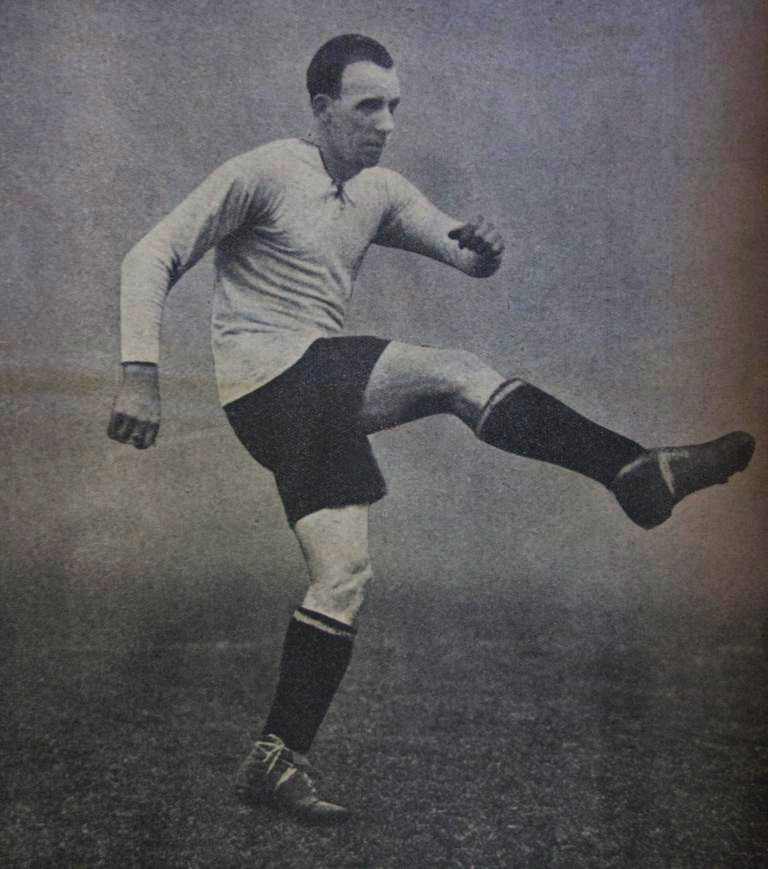 He played 73 times for Chelsea, but 12 years of hard knocks in Gaelic football and the just-as-physical association football had begun to take their toll. After three seasons at Chelsea, he moved north of the border to Clyde, helping them to what remains their highest ever finish of third-placed in the Scottish First Division.

But it wasn’t long before Kirwan was back in London, joining up with his former Spurs colleague Sandy Tait, who was now the Leyton manager, for one final hurrah.

Kirwan was an almost ever-present during his one season with Leyton, playing in all but three of his club’s games, scoring six goals. He missed the two games on the 27th and 29th of December with “a cold”, though being teetotal and a non-smoker, this may well have been true. Leyton finished 10th overall, thanks in no small part to Kirwan’s contribution.

He retired from playing at the end of the 1909-10 season, and was quickly offered a job at Ajax, though little of it was reported at the time, with British newspapers just commenting that the famous forward “had moved to Holland to coach”.

In 1910, Ajax were still an amateur club playing in the Dutch second division. However, it was at this time that the then-chairman, Chris Holst, looked to push the club on, by investing more money, signing new players and hiring a British manager. During a summer tour of England, Holst happened to come across Jack Kirwan. As an out-of-work former FA Cup winner and an international footballer with 17 (Irish) caps, Kirwan was just what Holst was looking for and was hired. Kirwan kept his true nationality quiet from Holst, playing along with the assumption that he was British, becoming Ajax’s first-ever professional coach.

Kirwan was an immediate success in Amsterdam. In his first season, he steered Ajax to the second division title, and after winning a promotion play-off against Breda Zeste, Ajax became a top-tier club for the first time.

This promotion had one other long-lasting legacy. A kit-clash with Sparta Rotterdam meant Ajax would have to change their strip, adopting Kirwan’s chosen colours of white with a single red stripe.

The Dutch National Championship, as it was then known, was split into two divisions, East and West. Ajax took their place in the Western division alongside teams such as Sparta Rotterdam and Haarlem. In the 1911-12 season Ajax finished eighth and avoiding relegation – as much as Ajax could have hoped for. All the while, Ajax’s stock was on the rise, and Gerard Fortgens became the first Ajax player to be ever selected for the Dutch national team.

After another solid season in 1912-13, Ajax were unfortunately relegated in 1914, forcing Kirwan to re-build the team from the bottom up. His work was cut short by the outbreak of the First World War, when Kirwan returned to London.

After the war, he went back to his native Ireland to manage Bohemians of Dublin for a season and then spent two seasons in Italy, guiding Livorno to third and fifth-placed finishes in the northern section of Prima Divisione (the predecessor to Serie A). He had one final spell in professional management at Bohemians in 1924, before returning to London to settle for good.

He was a sportsman to the end, and after a brief couple of years owning a sweet shop in Wealdstone, he worked as an engineer for Lyons and Co, where he served until he was 79, all while managing the Old Lyonians FC.

While not the most famous or successful manager in Ajax’s history, there can be no doubt that the Irishman (via East London) sewed the seeds which helped Ajax become the club they are today.

Kirwan wasn’t the only former club player to have success managing abroad though; last season, we looked at Billy Barnes, who won three Copa Del Reys at Athletic Bilbao (you can read that on walthamstowfc.com), and more recently, Hasan Oktay led Gor Mahia to the Kenyan Premier League title in 2019. 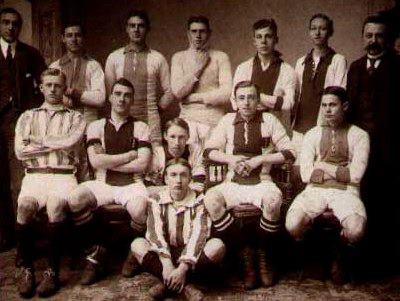